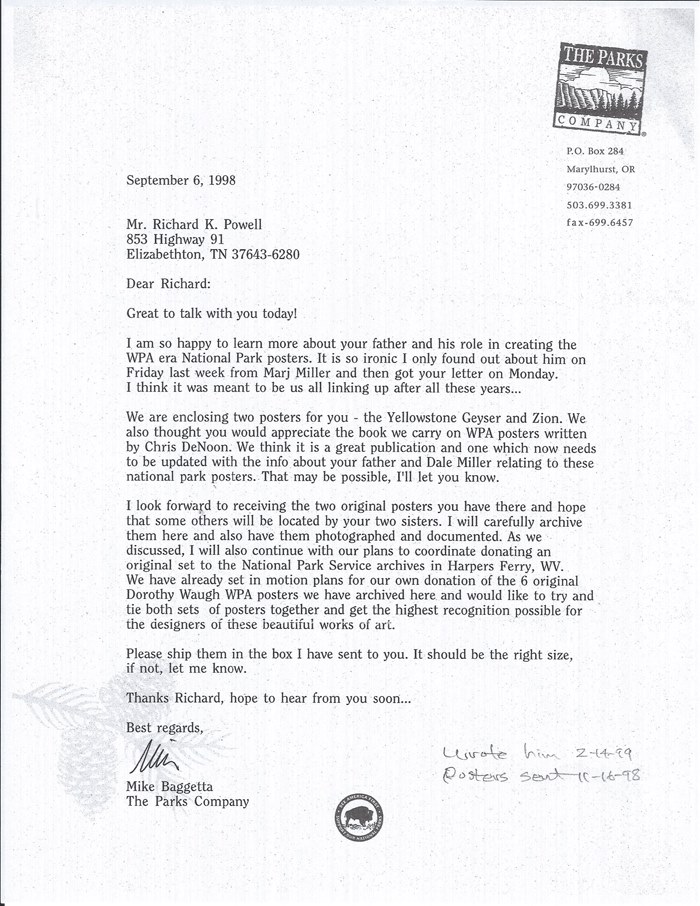 Mike even sends a special art case to protect these rare prints.  Below, Marj Miller, wife of Dale (who was elderly and likely couldn't write) writes to Mike some of the history of when and where these were made.  This letter undated but is likely in the Fall of 1998--Dale Miller died 7 years later taking his story with him. 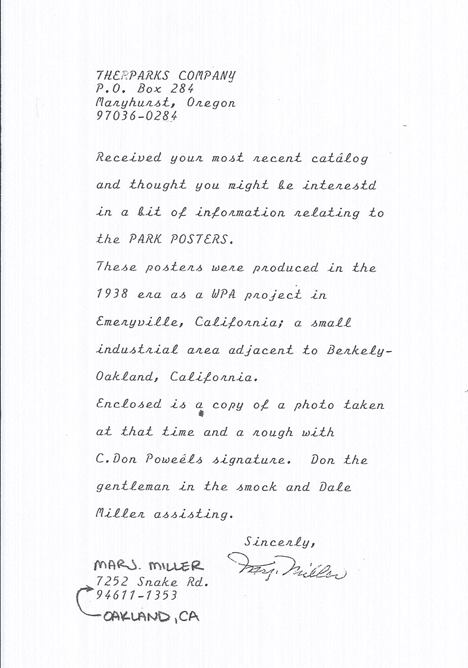 Below:  Promises never kept.  And Mike's "unilateral" decision to keep originals and return copies to Richard. 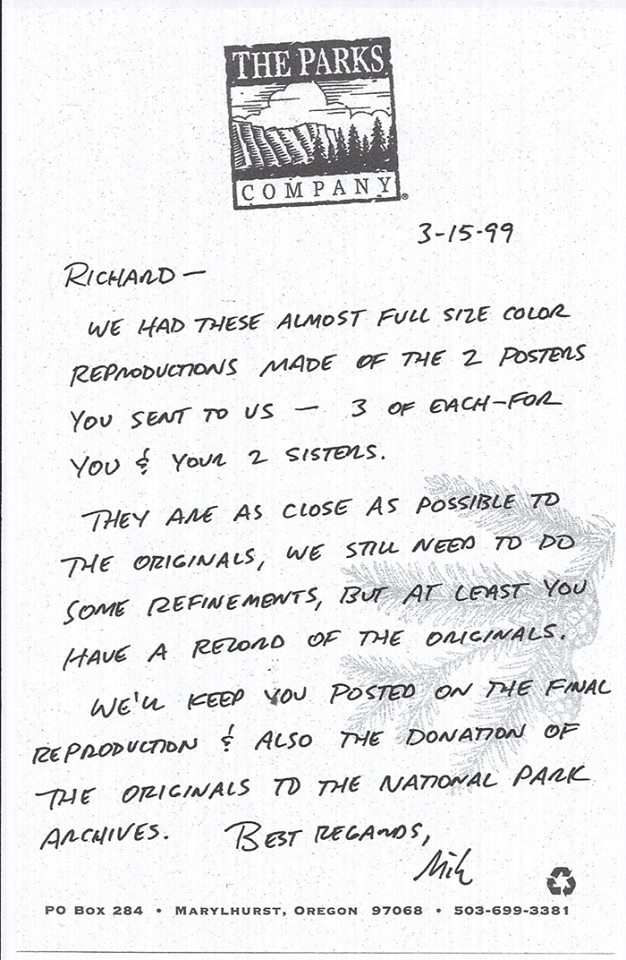 This letter (below) is pathetic.  Richard still holds out that his father will get the recognition he deserved.  Mike holds on to the originals (including the family photographs) in case.......the museum wants copies.   Copies, Mike?  They want the originals--as you earlier promised. 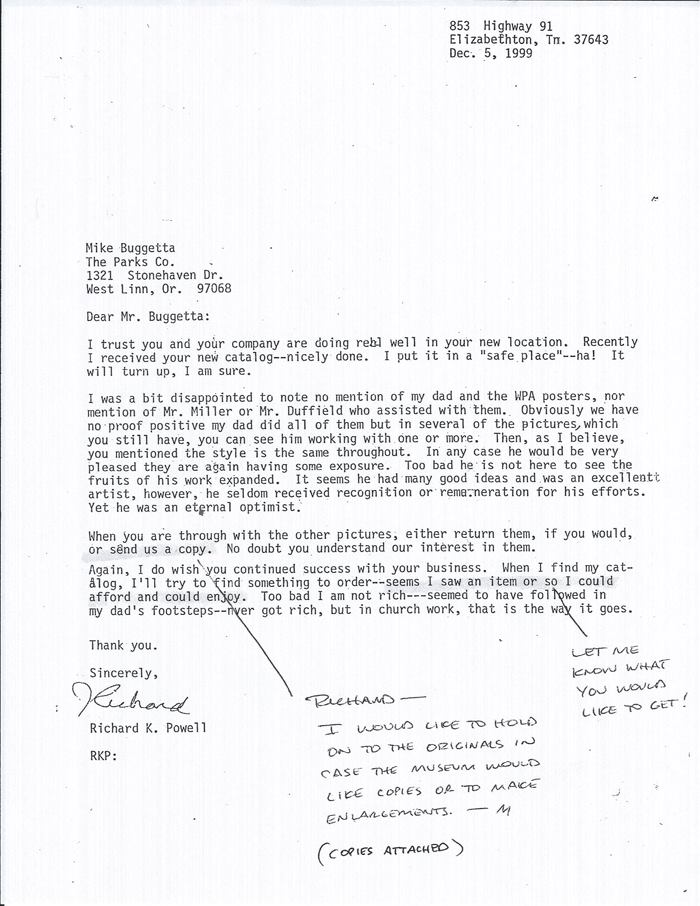 The below letter is nothing but hooey.  I refute every paragraph--in fact, Mike did just the opposite. He witheld this information on his website because if this information came out, I would have seen it and sought out Richard Powell and discovered this deception.  Mike also switches the potential donations to the Zion Natural History Association and the Museum of the Yellowstone; more obfuscation.  I work with both of these organizations and when I called them, neither had received their respective original poster.  Neither was Harpers Ferry nor the National Archives linked to this discovery.  Quite to the contrary, Mike furthers his deceptions and obfuscations by stalling for time. 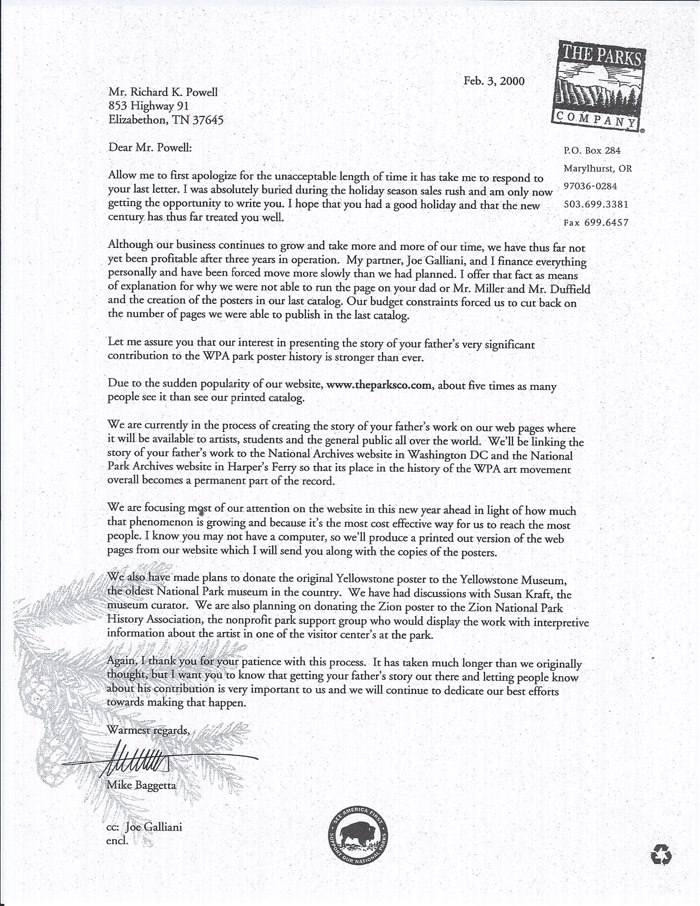 And stall he does.  It's now almost two years later....."it seems that time just flies on by."    This is the "sting" where Mike claims to have the posters appraised by George Theofilus (Miscellaneous Man, who sells WPA poster art) for a paltry $600 each. Here is George Theofilus's response: 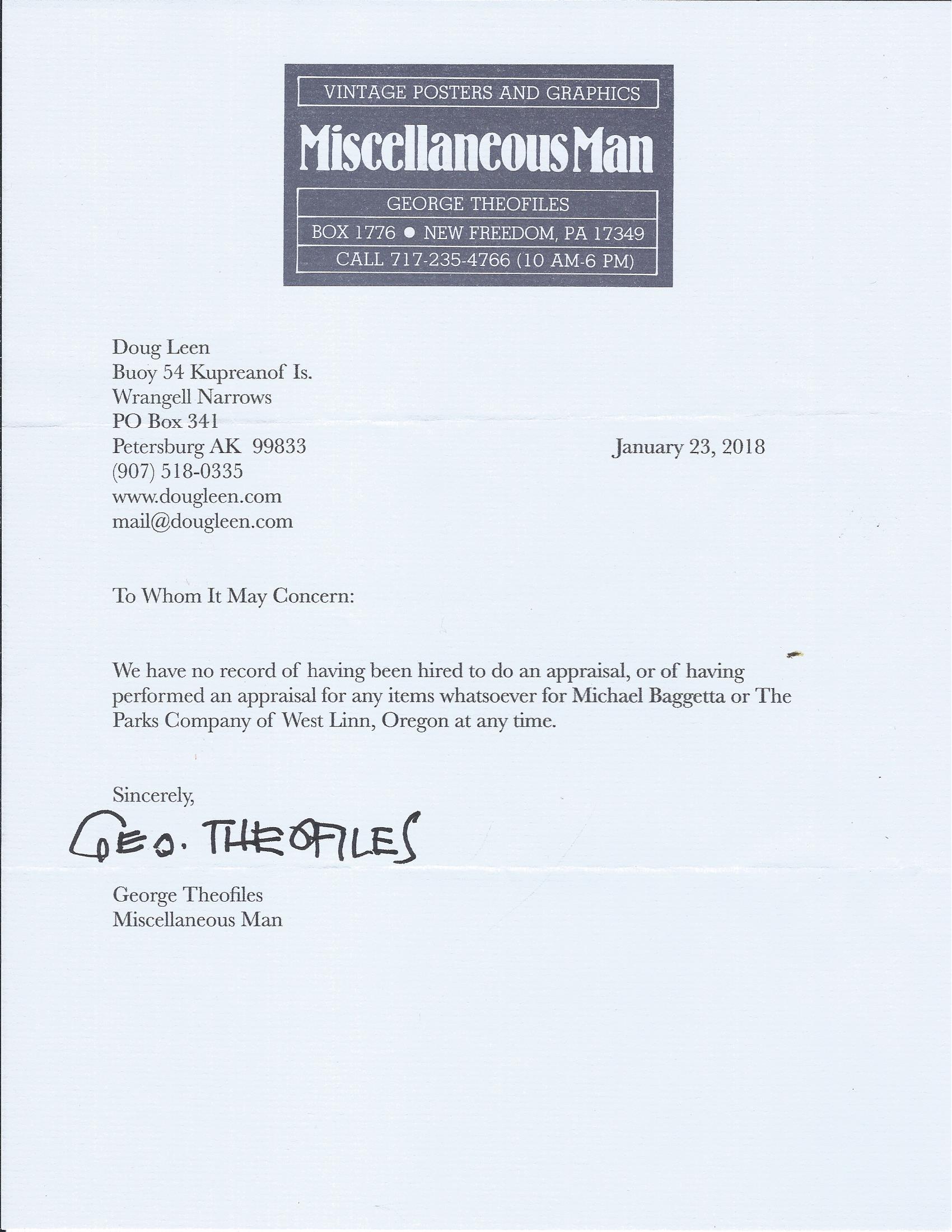 Mike then sends a check to Richard to to allow him "flexibility."  You mean keep them, don't you Mike.  Mike had no intentions of donating them.  Read on...... 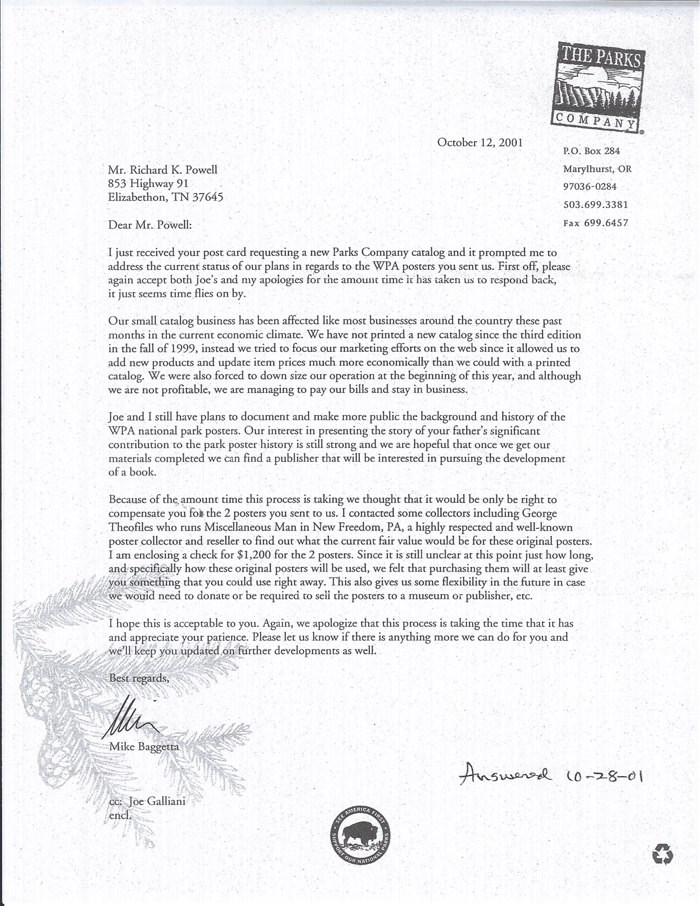 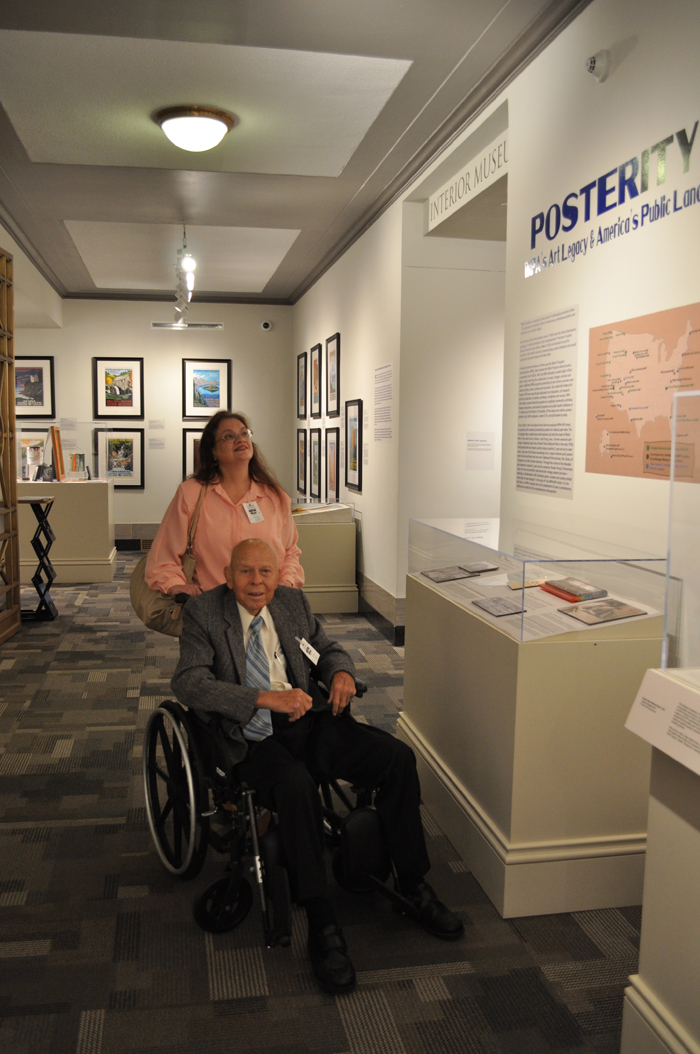 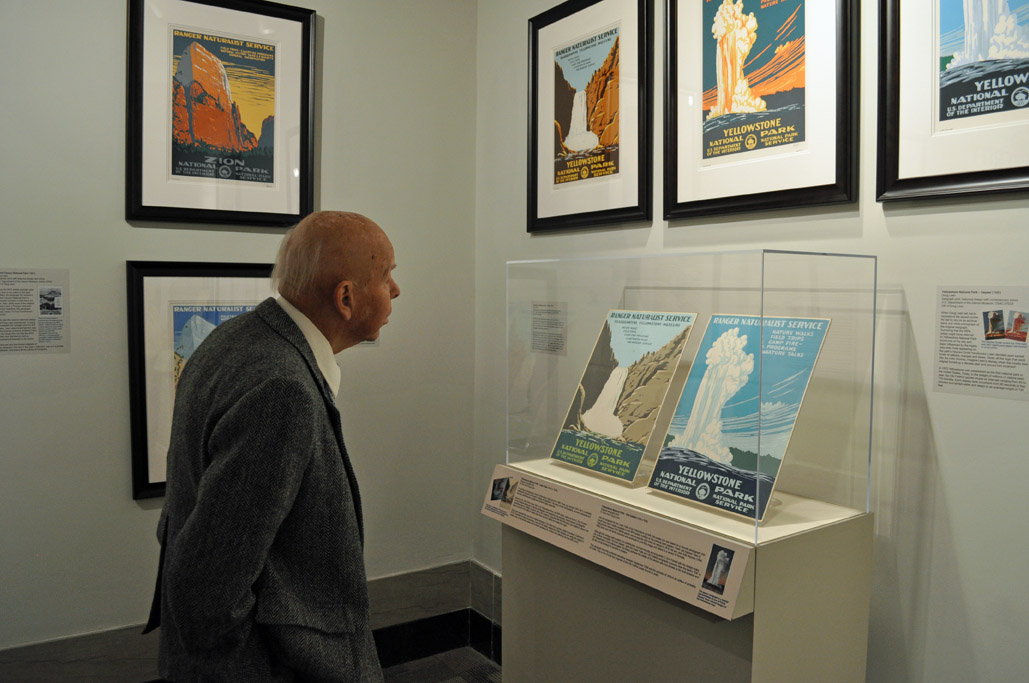 A letter from Richard Powell to Mike Baggetta (below) describing his trip to Washington DC to view his father's exhibit, and asking Mike the final disposition of the two originals he lent to Mike 15 years earlier. I sent both Richard and his wife, Nancy, up to Washington, put them up in the Hilton Hotel for two nights, so Richard could view his father's works and the "credit he so deserved."    Mike:  This is what Ranger Doug had in mind when it comes to giving C. Don Powell the credit he deserves. 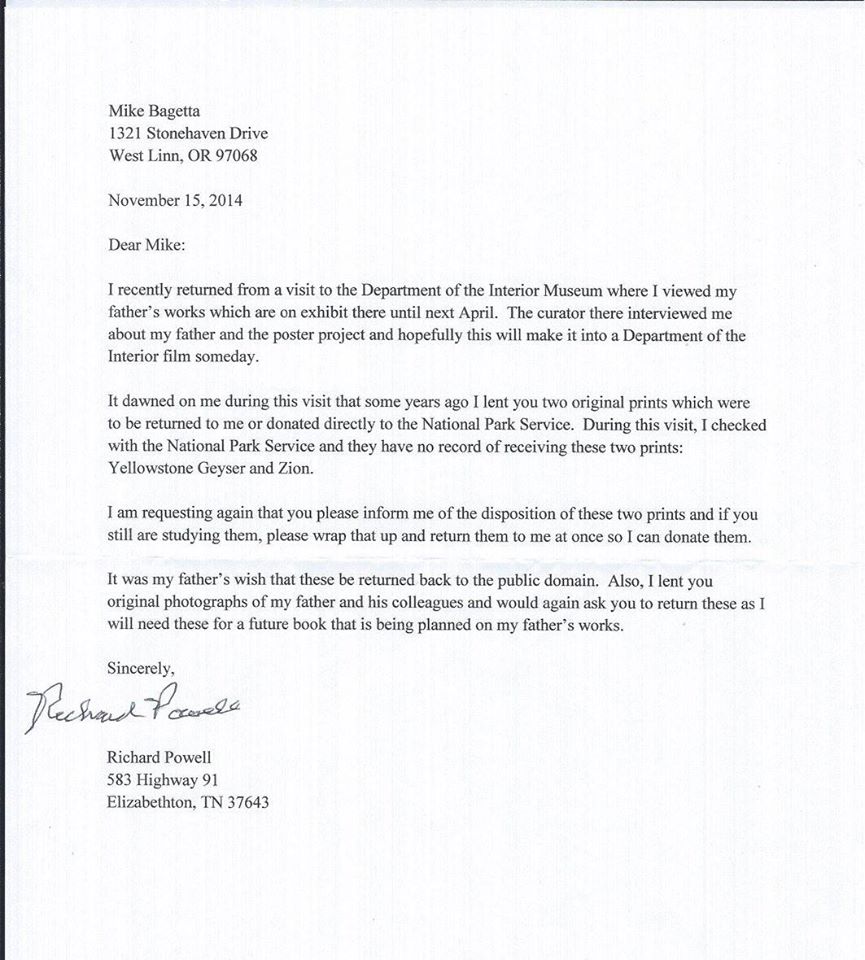 Mike's final letter to Richard (just weeks before Richard's death) stating that he donated the original prints to the Harpers Ferry Center (NPS Archives).  But that never happened as Mike continues his deception.......read on. 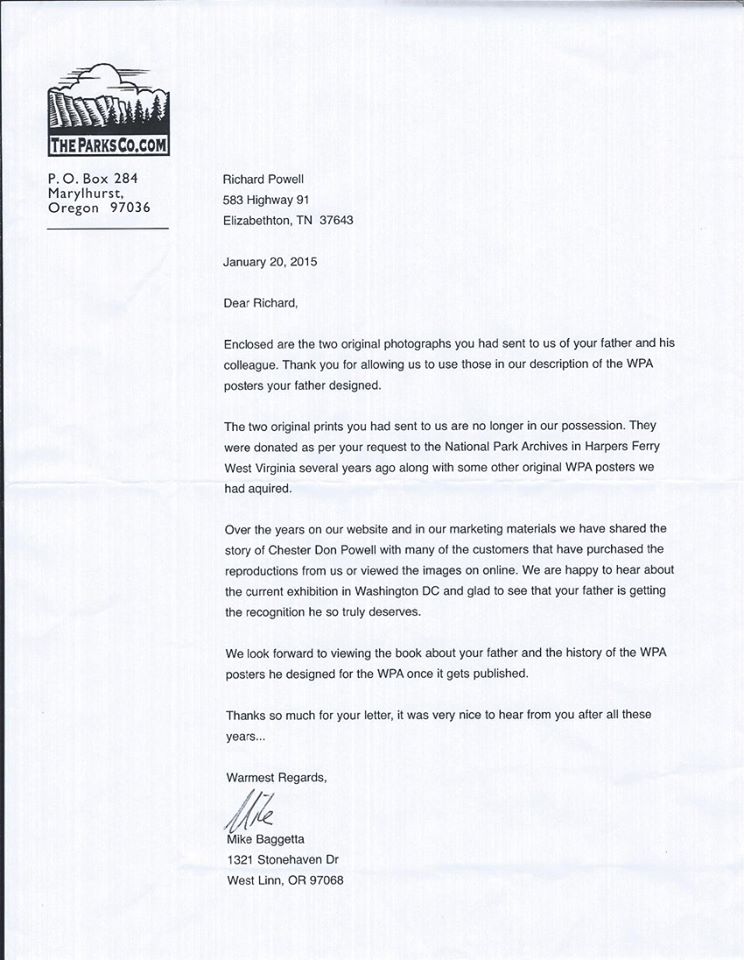 After reading these letters, first made available to me at Richard Powell's home in Tennessee, I instantly figured out Mike's deceptions.  Mike had used every trick in the book to bilk an elderly man out of very valuable artwork--artwork which was intended to be returned to the public domain;  sending him reproductions in place of originals, coming up with a non-existant appraisal, and stalling for time, hoping Richard would pass on before this became an issue.

Besides the Zion Natural History Assoication and the Museum of the Yellowstone not receiving these posters, here is the email from the Harpers Ferry Center (NPS Archives):

I subsumed Collections at HFC this month and am now division chief for 2 units. Wade has kept me informed about this issue for a long while, so I am somewhat up-to-date on the issue.  As Wade mentioned he has not found the posters in our collection.  Last year, we did a thorough check, when we moved collections to work on the floor and then moved collections back when the floors were done.  If the posters were here, surely they would have been found during those 2 moves, and they were not found.

And then from Wade Myers to Linda Blaser:

A point of clarification:

When Mr. Doug Leen brought to our attention the possible donation of NPS WPA-era posters by artist Chester Don Powell, we made a careful and thorough search of our records and collection materials, but we found no evidence that Harpers Ferry Center (HFC) ever received from either Mike Baggetta or The Parks Company original WPA-era Zion National Park or Yellowstone National Park (geyser) posters/prints.

As you have pointed out we conducted another thorough check for these posters/prints recently when we moved the collections to work on the floor and then moved collections back when the floors were done.

We do have in our collections several reproductions of the Zion National Park posters/prints created by Mr. Leen of Ranger Doug's Enterprises which include a copyright symbol, the date 1995, and his name.

Perhaps Mr. Baggetta can provide a copy of the transmittal letter sent to HFC which would have accompanied the two original posters/prints he claims to have sent here.

This matter should not be confused with the donation of six (6) pristine WPA-era color lithograph posters by artist Dorothy Waugh which HFC did receive as a donation from The Parks Company when Tom DuRant was working here (I don't know the specific date).

Mike--where is the "Letter of Transmission?"

This article will be continuously updated as the inquiry progresses.  As of 10/2, Mike was sent a demand letter by the Estate to produce/return the two missing original posters.......

Early January 2018, Mike Baggetta is served a complaint requiring him to respond to the Court as to the whereabouts of these two prints.

January 29, I received a phone call from Nancy Russell at the Harpers Ferry Center Archives, who replaced Linda Blaser.   Nancy informed me that she has just received two original WPA posters from Mike Baggetta, 19 years after borrowing them.  Meanwhile the public was deprived of these for the NPS Centennial, in 2007 Dale Miller passed away taking his side of this story with him, and sadly Richard Powell never saw them returned before his death in 2016.

There are still three missing posters:  Wind Cave and Great Smoky Mountains which have never turned up.  The HFC Archives has a set of black & white negatives taken in about 1950 of these two images so we know what they look like.  The only known copy of Yosemite was auctioned in 2005 for $4320 to a private buyer; both the Library of Congress and I had expended our budgets.   If any of these three original posters surface I will purchase these for $10,000 each (depending upon condition) with the promise to donate them to the National Park Service or Interior Department depending on their collection needs.